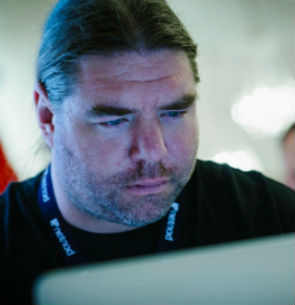 Jan Žorž started his professional career in RS-232/VAX VMS world in 1992 and continued through Novell and Windows environments all the way to Solaris and other UNIX derivatives that today represent the native environment for the majority of his projects. Jan is the Internet Society’s Operational Engagement Programme Manager. He works on operational initiatives to ease the deployment of IPv6 and other technologies. He is also working to help the industry document best-current operational practices and to improve operator feedback to the IETF.

Jan is one of the pioneers of SiOL, the Slovenian national ISP, and has been involved in the organization from the beginning. Among other activities, he began experimenting in 1997 with Internet streaming multimedia content. Based on these experiments, he successfully accomplished projects such as “Dhaulagiri ’99 Live” (an Internet multimedia transmission of Tomaz Humar’s solo climb of the south wall of Dhaulagiri (called Death Zone in the Himalayas), “Ski Everest Live 2000” (an Internet live-video transmission and monitoring of extreme skiing from the summit of Mt. Everest by Davo Karnicar) and other similar projects. Together with two other members of the team “Dhaulagiri ’99 Live”, Jan received a media award/statue “Victor” for special achievement.

For the last seven years, Jan has been working as a consultant in the IT field, specializing in IPv6. He co-founded the Go6 institute (not-for-profit), a Slovenian IPv6 initiative whose main objective is to raise IPv6 awareness in Slovenia and alert the community to the fact that we are approaching extensive changes on the Internet.

Due to the success of Go6 Institute, Slovenia is currently leading the EU as the country most prepared for IPv6 (according to the RIPE NCC’s IPv6 RIPEness study). Jan has been invited to present around the world on his work, the model of the Go6 platform, IPv6 awareness raising and deployment at the national level. These speaking engagements have included conferences such as RIPE Meetings, Google IPv6 Implementors Conference 2010, Internet Governance Forum meetings, OECD meeting, World IPv6 Congresses (Paris and London), as well as national forums in Germany, Greece, Norway, Macedonia, Oman, Brazil and many others.

Jan is also primary co-author of a very successful procurement (specification) paper, published as official RIPE Best Current Practice document RIPE-501, titled “Requirements For IPv6 in ICT Equipment”. This document is translated into more than 10 languages and is used around the world by enterprises and governments when requesting IPv6 features in ICT equipment purchases. RIPE-501 was recently replaced by RIPE-554, also co-authored by Merike Kaeo, Sander Steffann and Jan Žorž.

Jan is based in Škofja Loka, Slovenia (EU).

As many mobile operators were moving to IPv6 only which is incompatible with IPv4 on the wire, it’s necessary to employ transition mechanisms such as 464XLAT or NAT64. The Go6lab NAT64/DNS64 testbed was therefore established so that operators, service providers, and hardware and software vendors can see how their solutions work in these environments. This […]